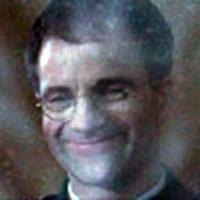 We saw a glimpse of him in the first movie and he didn't appear in the second movie, but the January 2004 edition of the UK's Empire Magazine

has a brief article with Adrian Rawlins

, the man who portrays Harry's deceased father James Potter, with regard to the Prisoner of Azkaban:

You'll see him next in Harry Potter 3: "I play Harry's dead father, so there's not a great deal to do. I'm in the next one for about four seconds - Harry has this photo album of his parents and the photos move, because they're magic. The director, Alfonso Cuaron, has a really good attitude and he wants to make the dead parents a bit more 'Camden bohemian'. They're cool wizards, not just these godly figures from Harry's past. They got up to things in their day!"

It makes one wonder how far Cuarón's edginess can reach in this third Potter movie installment.