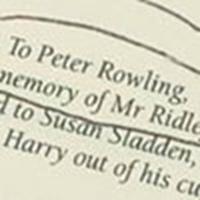 Rowling's Dad to cash in on Potter secret

In the letter written at the start of Harry Potter and the Goblet of Fire, JK reveals character Ron Weasley is based on a family friend called Ronald Ridley - something the author was keen to keep private.

, "Dear Dad, If I had said Ronald (Weasley) Ridley, they would have tracked the poor bloke down... but that's why Ron's called Ron, of course!"

The sale will take place at Sotheby's

[Editor's note: My question is why is he trying to raise cash - is it for a good cause?]