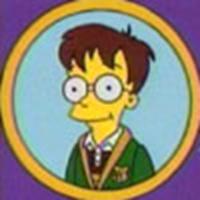 After much ballyhooing, the creator of the Harry Potter series finally made her appearance on a star-studded November sweeps episode of The Simpsons

), when the Simpson family visited Britain.

has put together a great little summary of the show

, including screen captures. Thanks for your efforts, Matthew!