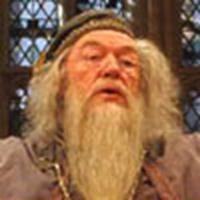 , son of the late Richard Harris

for the role is just fine. He recently acted along side Gambon for a new movie, Sylvia

"I didn't discuss it with Michael during Sylvia, as we didn't meet on set," said Harris. "But he is a fine actor and I'm sure he will make the part his own. But there will be a tinge of sadness when I see the films."

and the dark comedy/drama Igby Goes Down