The Boston Globe magazine has written a very long, detailed article about fan fiction, including the truly "adult" variety 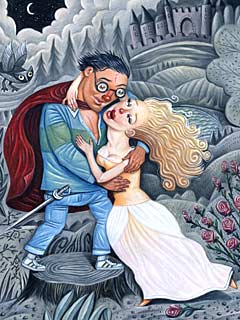 Since its June 21 debut, readers around the globe have been devouring Harry Potter and the Order of the Phoenix, the long-awaited fifth book in J. K. Rowling's blockbuster series of youthful wizard tales. They might not know, however, that a surprising number of Potter fans had already taken matters into their own hands, writing and distributing stories that put Rowling's famous trio, Harry, Ron, and Hermione – as well as every other character mentioned in her books – into situations that are often romantic, sometimes homosexual, and occasionally pornographic.

Fan fiction, or "fanfic," didn't start with Harry Potter or the Internet, but that combination has brought it as close as it's ever been to the mainstream. On the way, fanfic is raising a host of legal, moral, and creative questions that only promise to become more entangled as the remainder of Rowling's Harry Potter books is released (seven are planned in all).

, hosts upward of 15,000 short stories or book chapters, supports 24,500 registered users who have posted 563,000 fanfic-related messages, and receives on average more than 100 new pieces of writing every day. Another popular site, the entry-level FanFiction.net

Though their carefully guarded anonymity might suggest otherwise, writers and readers insist that fan fiction is just one of many perfectly valid ways of responding to pop culture. "With Harry Potter, people are always trying to figure out what's going to happen next. Fanfic just puts that speculation into narrative form," says Heidi Tandy

, a Miami intellectual-property lawyer who has no problem using her real name online and in print.

"I have heard people say that if something isn't completely original, it's not creative, that it's bad, bad, bad," says Tandy. "Do they mean bad like West Side Story or bad like Clueless" (the takeoff on Jane Austen's Emma)? Fan fiction has made me a better writer and a better reader. And you get feedback in two days! There's an emotional benefit, even if it's hard to quantify."

This is a very well-written, even-handed analysis. I highly suggest you read the entire article (link at top of page next to warning).