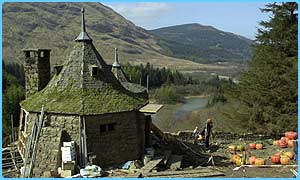 Youngsters and their relatives living near the Harry Potter film set in Glencoe were given a rare treat yesterday - a conducted tour of the forbidden site. Film-makers Warner Brothers invited the party from Glencoe Primary School to the set.

The children, some of whom wore wizard costumes, braved the pouring rain to be shown Hagrid's Hut, Hogwart's castle and gateway being built in the picturesque setting of the Glen, where filming is due to start later this week.

Since construction began the location has been plagued by unwelcome visitors, who have vandalised parts of the set and even resorted to stealing the giant polystyrene pumpkins.

This led to tightening-up of security with 24-hour guards and dogs brought in - in addition to signs warning people off.

But the children managed to magic themselves through these barriers, although still under the ever-watchful eyes of security men. They were allowed access to all the areas.

Thanks once again to Geri for the tip.