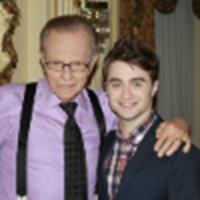 entitled Harry Potter: The Final Chapter on CNN, July 10 at 8 p.m. (eastern) in anticipation of the release of Harry Potter and the Deathly Hallows: Part 2.

Larry King will be interviewing the likes of Daniel Radcliffe, Emma Watson, Rupert Grint, Tom Felton, Helena Bonham Carter and Robbie Coltrane. In addition, the special will premiere all-new footage from the upcoming film, and feature a guided tour of the Wizarding World of Harry Potter by James and Oliver Phelps.

If you miss the first airing, it repeats again at 11 pm. We will be sure to have video from the special for you right here!

Harry Potter and the Deathly Hallows: Part 2 will hit theaters on July 15, 2011.