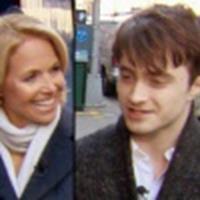 Their chat touches on his life as Harry Potter, his new Broadway play How to Succeed in Business Without Really Trying, his support of the Trevor Project, and how he feels about Twitter.

From the Orlando Sentinal

"This is the joke about me that people have on set, is that I'm an old man in a young man's shell," Radcliffe tells Couric. "So, at the last Potter premiere, of the Seven, Part One, it was my ideal premiere, because I did the red carpet, went inside, introduced the film, went off. I was at home by 10:30, with a bowl of Sugar Puffs, watching the History channel. And I've never been happier."