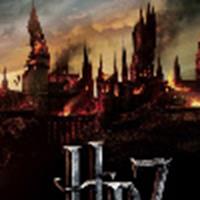 The first movie still from the upcoming Harry Potter and the Deathly Hallows: Part 2 has found its way

online featuring a battle-ridden Neville Longbottom during the Battle of Hogwarts, with a menacing Bellatrix Lestrange in the background.

UPDATE: Warner Bros. has requested we remove the "leaked" image.

Harry Potter and the Deathly Hallows: Part 2 will make its way to theatres on July 15, 2011.