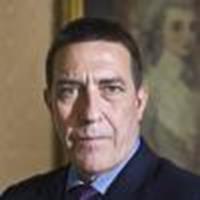 , Ciaran Hinds talked briefly about his role as Aberforth Dumbledore in Harry Potter and the Deathly Hallows: Part 2, as well as his experiences on set and much more.

Said Hinds on his role in the film:

My scene was a four-page exposition scene about Albus Dumbledore's childhood and how he's not all he said he was. It's that hole in the film that needs to be filled.

Thanks to our own Terrance Pinkston for the tip!