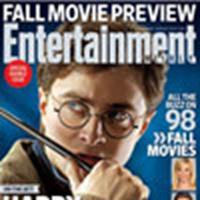 This weeks issue of Entertainment Weekly

features Harry Potter on the cover and includes interviews with producer David Heyman and actors Daniel Radcliffe, Rupert Grint and Emma Watson, as well as new images. But the most exciting news is where the movie Deathly Hallows will be split.

You can view and read the article here

. This week's issue of Entertainment Weekly is on sale tomorrow. Read at your own risk - enjoy.