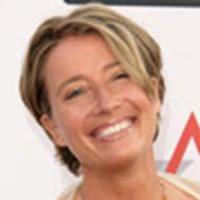 Emma Thompson to receive star on Hollywood Walk of Fame

to receive a star on the Hollywood Walk of Fame next Friday, August 6.

Ms. Thompson, who has won two best actress Academy Awards for her work in Howard's End and Sense and Sensibility will be joined by Maggie Gyllenhaal and Hugh Laurie in speaking at the late-morning ceremony in front of the Pig 'n Whistle pub on Hollywood Boulevard in Los Angeles.

Thanks to Mary Ellen for the tip.