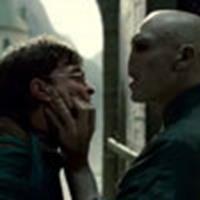 Update: New images from 'Harry Potter and the Deathly Hallows'

Some new images from the Harry Potter and the Deathly Hallows trailer, which will be making it's debut tomorrow, have appeared

online. The photos show images of Harry and Voldemort; Ron and Hermione at Shell Cottage; and what looks like an attack on Hogwarts.

UPDATE: Additional images from the trailer are available here

In one scene, Voldemort grabs Harry's face and malevolently hisses "Why do you live?" And brave Harry responds, "Because I have something to live for."

Also, David Heyman describes the technology used on the films:

"The technology has developed and offers great possibilities," Heyman says. "We won't be going for that 'wow, things always jumping out at you' effect. I think the best 3-D doesn't have to be aggressive. We'll be pushing back from the screen. We're going for an organic, truthful 3-D."

But what about 3-D fatigue among audiences? "Those people who aren't keen to embrace the 3-D of it all will have plenty of opportunities to watch it in 2-D," he says. Technical advances have leaped forward over the course of the series. "A lot of the stuff we do in this film, we couldn't have done on the first film," says Heyman. "The quality of the visual effects is so much better. (House elves) Kreacher and Dobby will be so much better realized than in the previous films since we have new technology to better capture their faces.

"What I love about these films is the blend of old and new technology."