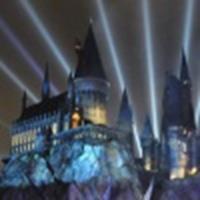 It was a media spectacle this morning as Universal Orlando Resort's Wizarding World of Harry Potter officially opened to the public.

The stars of the films (and the new "Forbidden Journey" attraction inside the park) were on hand to meet with lucky schoolchildren who got to enter first, after James and Oliver Phelps ignited daytime fireworks and the "Hogwarts Express" train conductor greeted guests.

Ticket holders in line were told by one Universal employee to expect a 4-6 hour wait to enter the park, while television news helicopters

If you missed today's opening event, you can watch it below (on a loop).

Stay tuned to HPANA in the coming days for more pictures, videos and reports!