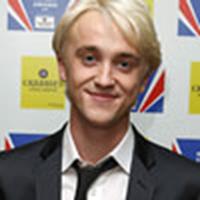 While in Los Angeles for the MTV Movie Awards, Tom Felton (Draco Malfoy) stopped by the Late Late Show with Craig Ferguson

and chatted about everything ranging from his recent cameo in the film Get Him to the Greek, to the ending of Harry Potter, and much more.

Check out the HD video below:

To read about Tom's recent appearance at the MTV Movie Awards, click here.