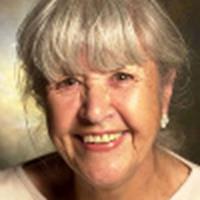 We have received word that Ninette Finch, who has appeared on past Potter films as an extra, has been cast as Neville's grandmother, Augusta Longbottom, in the upcoming Harry Potter and the Deathly Hallows films.

Yes I am playing Augusta Longbottom although it is not a very big part... I have also played a couple of witches and was one of the people on the Millennium bridge when it was under attack.

You can see her personnel page, here