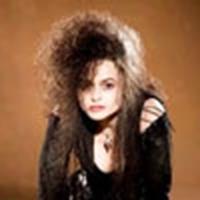 In a new interview Helena Bonham Carter (Bellatrix Lestrange) in the Harry Potter movies discussed the last movie, "Deathly Hallows 2," and her death scene at the hand of Molly Weasley - Julie Walters.

I'm mostly in [Deathly Hallows: Part 2]. But it was fun. I died on my last day, which was really weird -- to actually be [killed] on my last day. Molly Weasley - Julie Walters - kills me.

And it'll be quite the moment.I do get a good death scene. It was really exhausting. As usual! [I'm] duelling, with a wand, on a table. I fell right off. I was clever enough to say, 'If you're going to ask me to duel, backwards, can we put a stuntman at the end?' They said, 'Ah, you won't need one.' And what did I do? Walked straight off.

You'd think with 70 people looking at you, one of them would go, 'Er, could you stop?!' No! They loved it. I nearly killed myself -- on the day that I died."

Bellatrix wasn't on the page, I did think, What can I do to make this interesting? She was just written as tall and gaunt, but I knew there was something I got attracted to -- playing arrested development. You know, children. Bellatrix is another child -- stuck and totally anarchic.