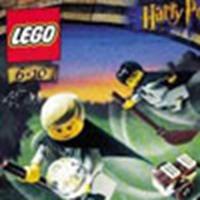 Warner Bros. announced today via press release, that they have extended their partnership with toy manufacturer,The LEGO Group

. Under the agreement, The LEGO Group will develop construction sets and a board game inspired by Harry Potter in time for the release of Harry Potter and the Deathly Hallows, Part I" later this year.

We have enjoyed a longstanding, successful partnership with The LEGO Group around Harry Potter and we are delighted to continue this relationship as we approach the release of the seventh film. Fans of the franchise will be excited to discover the wonderfully original LEGO products inspired by the beloved stories and characters.

The world of Harry Potter has inspired some of our most successful products and we are thrilled to continue creating imaginative play opportunities for fans everywhere. The magical stories brought to life in the films give us the potential for an incredible array of offerings, the best of which are represented in our upcoming lines.”

The LEGO Group will enter the board game category for the first time in 2010, with a constructible board game called Hogwarts, launching in August:

Players will be able to build and then move throughout the iconic castle to be the first to collect various objects to win the game – but even the most skilled players can be foiled by an ability to move classrooms around the board.