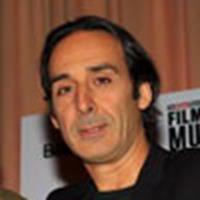 Composer named for 'Harry Potter and the Deathly Hallows, Part 1'

It has been confirmed

by MuggleNet that french composer Alexandre Desplat will be scoring

the music for Harry Potter and the Deathly Hallows, Part 1. Mr. Desplat recently scored soundtracks for The Twilight Saga: New Moon, Julie & Julia and The Queen.

Mr. Desplat was recently honored by the Hollywood Film Festival and Hollywood Awards, and also has been nominated for two oscars.