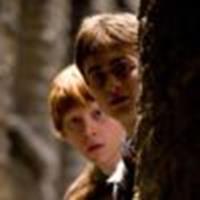 A few days ago we told you

an interview with Potter stars Daniel Radcliffe and Rupert Grint would be aired on Australian talk show Rove. The show has since aired and video of the interview has now appeared online.

In the interview, which took place on the set of Harry Potter and the Deathly Hallows, host Rove McManus asked both Daniel Radcliffe and Rupert Grint about working on the Harry Potter films and about whether or not they've ever brought home any props from the set.

A video of the interview can be seen here