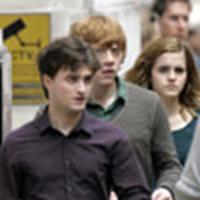 from the film set of Harry Potter and the Deathly Hallows film have appeared online.