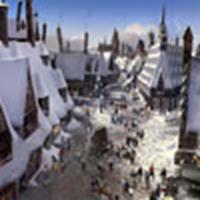 More on 'Wizarding World of Harry Potter' in Orlando

at Universal in Orlando, Florida. The article mentions that there is a possibility that previews will happen "as early as Christmas 2009 and officially will open summer 2010," and that by reviewing patents you are able to gleam what may be included at the site.

Elsewhere in Potterworld, you’ll find the Three Broomsticks pub-restaurant and other money-spending opportunities, all behind snow-covered Hogsmeade Village facades (crafted by local scenic arts shop Nassal Co.). The Flying Unicorn kiddie-coaster will be re-themed to one of Hagrid’s magical creatures, and Dueling Dragons’ elaborate castle queue will be redecorated (hopefully not destroyed) around a wizarding competition. What’s less certain: the details of “Project Strongarm,” the next-generation “RoboCoaster” that is supposed to be new area’s E-Ticket. After Universal contracted Kuka to attraction exclusivity on their latest robot arm technology, Hill sparked reports of a “flying car” ride based on the Weasleys’ Ford Anglia from the Chamber of Secrets. More recently, American Scenic briefly released (and quickly retracted) designs depicting a benchlike vehicle navigating the Forbidden Forest, an Acromantula nest, the Basilisk’s lair and other environments from the second novel. Fueling speculation, Universal is emphatically reticent on the future of the Sinbad stunt show (rumored site of the project) and official artwork of the development is artfully vague in that area.