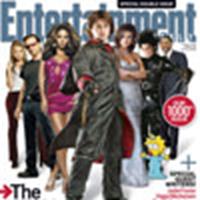 With the 1,000th issue of Entertainment Weekly on newsstands today, the Harry Potter and the Goblet of Fire book is included

at the number 2 spot on their 'New Classics Books' list.

on their site. The special double issue hits newsstands today and has Daniel Radcliffe, Bono, Will Smith, Lisa Simpson and Johnny Depp on the cover.

Update: You can see scans of the articles here