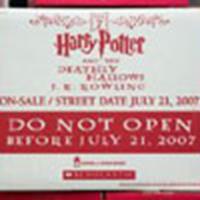 Scholastic, the U.S. publishers of the Harry Potter series have issued

a statement saying that they will take legal action against two companies, Deepdiscount.com and distributor Levy Home Entertainment, for distributing and selling copies of Harry Potter and the Deathly Hallows before the release date.