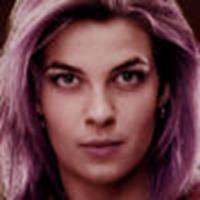 Scans from a Harry Potter and the Order of the Phoenix poster book have surfaced online. There are eight new images, including shots of Tonks, Luna, the Weasleys and Harry.

UPDATE: We've now been told the images are from the Harry Potter and the Order of the Phoenix Movie Poster Book by Scholastic. It's not available

until June 1 and is not currently listed for sale at Amazon.

UPDATE II: Thanks to Stefania for sending in a link to even more images