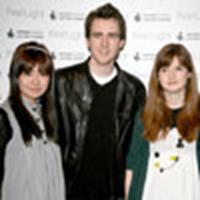 On Sunday we let you know

that the first film in theHarry Potter series had been voted favorite film by children in Britain in a poll by First Light Movies, the young people's filmmaking arm of the UK Film Council.

The awards ceremony was held in London earlier this evening and in attendance were Harry Potter actors Imelda Staunton, Katie Leung, Matthew Lewis and Bonnie Wright.

you can see some pictures here