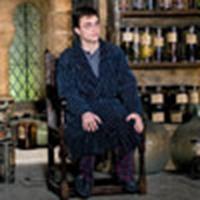 New set images from 'Order of the Phoenix'

In a preview of set designer Stuart Craig's work on Harry Potter and the Order of Phoenix, some new images from the movie have appeared on the MSNBC web site

on their main news page).

Each of the pictures, which are interactive, comes with a brief description of the scene and includes new pictures of Harry at the Ministry of Magic and Harry sitting in Snape's potions room.

The last picture of Harry at the MoM has a description of the scene as follows:

In this shot, taken from near the end of the film, Harry is deep inside the ministry and sees, for the first time, the long corridor of the Department of Mysteries, gleaming in black ceramic tile, which has been haunting his dreams all year. This dream will guide him and his loyal friends down this corridor, toward a room filled with glass orbs--a set which will be completely digital in the film. One of those glass orbs holds the prophecy that binds Harry to Lord Voldemort and that seals Harry's fate. This corridor will also ultimately lead Harry toward his greatest battle, and the death of someone very close to him.

You can also see the images in high-resolution starting here

Mr. Craig is currently working on Harry Potter and the Half-Blood Prince which begins shooting later this year.

UPDATE: Thanks to RonW you can see hi-res versions of the pictures here

(just scroll down the page).

UPDATE II: You can now read the interview with Mr. Craig online