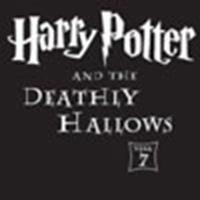 It was announced this morning on JK Rowling's web site that the publication date for Harry Potter and the Deathly Hallows will be July 21, 2007.

From the author's site

2007 marks the tenth anniversary of the publication of Harry Potter and the Philosopher's Stone. The Harry Potter series has gone on to sell 325 million copies worldwide and been translated into 64 languages. The last book, Harry Potter and the Half-Blood Prince, sold 2,009,574 copies in the UK on the first day of its release, making it the fastest-selling book of all time. All six Harry Potter books have been number one bestsellers around the world.

Bloomsbury will be publishing their children's hardback edition, an adult hardback edition, aswell as a special gift edition and, jointly with HNP, the audio book, read by Stephen Fry and released simultaneously for the first time. The standard hardbacks have a Recommended Retail Price of £17.99.

Barnes & Nobles in the U.S. will be selling

. A hard-cover edition (according to the BN web site

You can discuss the release date in our forums.

Thanks to Ali and Annie for the tip.