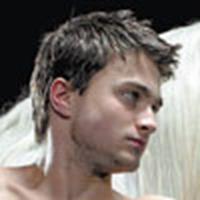 There was no hesitancy about taking off his clothes.

He has a confidence in his own appearance. With the performances that I've witnessed, when that boy takes his shirt off, Harry Potter has flown out of Hogwarts for good.

Please note that these photos contain quite a bit of bare skin, which has caused a fair bit of concern

, according to the New York Times:

Thanks to Jenna and Page for the original tips and images.