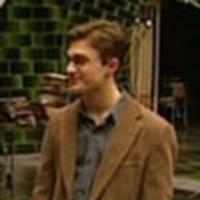 on Monday some television shows in the U.S. will be previewing Potter movie news next week.

' will be showing a set visit with Daniel Radcliffe in an upcoming episode:

E! TV will feature a never before seen set tour of the Harry Potter and the Order of the Phoenix with Dan Radcliffe showing host Ben Lyons behind the scenes look at the new film. There was a promo clip for it airing last Friday, and it was on the Daily 10 show. The segment airs next week on the Daily 10.

UPDATE: You can see a video clip of the above show here

Meanwhile, according to Maria MTV's TRL

announcement site states that each Monday they will preview news on upcoming movies:

I was reading the announcements on MTV and apparently this week they will be giving out Harry Potter news I don't know what it will be but make sure to watch.

Please check your local listings for both shows and we hope to have video as soon as we can. Thanks to Violet and Maria for the news.