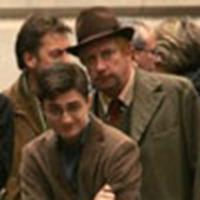 New set pics from 'Order of the Phoenix'

a scene from Harry Potter and the Order of the Phoenix have appeared online. The images show Mark and Daniel taken today entering a telephone box near Scotland Yard in London.

of the location, courtesy of London Taxi Tour

have also appeared. Thanks Don.