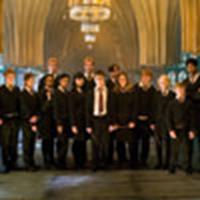 Thanks to Warner Bros. for sending over the hi-res versions of the images that have surfaced this weekend from Harry Potter and the Order of the Phoenix.

The images, five in total, show Harry fending off the Dementors; the sacking of Trelawney; Dumbledore's Army; Umbridge in her pink office and the trio (Ron, Harry and Hermione).

You can view the pictures here