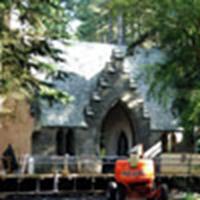 Some new pictures from the set of Harry Potter and the Order of the Phoenix have appeared online. The pictures are of the Hogsmeade set which was located in Black Country Park, Buckinghamshire, England.

You can see the images here