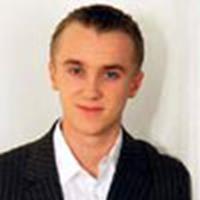 with a new layout and a new interview in which he talks about the movies, his love of driving and fishing.

Tom mentions that it is fun to make the films but weird to watch the finished product:

Obviously the scenes aren't shot in sequence and filming lasts so long that when I see it my first thought is 'where's the rest of it?' And sometimes I'm thinking 'oh yes, the next bit is really good' but then it doesn't happen or it is somewhere else in the action.

Meanwhile, Tom and his brother Chris, who will be attending the 2006 Junior World Carp Tournament

in New York, August 17-19 and can be heard in a telephone interview

with the organizers of the event discussing why they try to attend each year.

Thanks to Megan and TLC