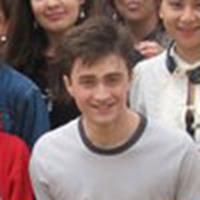 New photo of Dan from the 'Phoenix' set

Nínive, a Harry Potter fan from Brazil had the great opportunity of meeting actors Daniel Radcliffe, Imelda Staunton (Professor Umbridge) and a red-haired Natalia Tena (Tonks) this past week on the set of Harry Potter and the Order of the Phoenix.

Nínive had a chance to visit the set after winning a contest, held by SBT

in Brazil. You can see the group photo from the set here