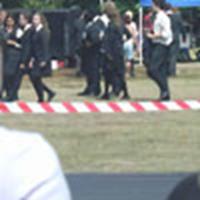 With filming resumed for Harry Potter and the Order of the Phoenix, a new set report has appeared on line. The report details filming at Virginia Water where previous filming has occurred, and includes descriptions of scenes with Prof. McGonagall, Hagrid and Slytherins Draco, Crabbe and Goyle.

(just scroll down, may contain spoilers):

There were two scenes being filmed today, both come at the end of HP5. First was the recovery of Professor McGonagall after her incident with the Death Eaters outside Hagrids hut; also following the attach at the Ministry and Hogwarts.

Professor McGonagall is resting in her chair, reading the headline He who must not be named returns in her Daily Prophet whilst speaking to Hagrid (today it was Martin Bayford) standing in for Hagrid who is such a giant of a man.

You can see some pictures here