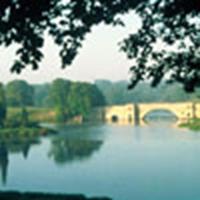 Filming of Harry Potter and the Order of the Phoenix resumed

this week with scenes being filmed at Blenheim Palace

Cast members, including Daniel Radcliffe, arrived at the palace on Monday for a two-day shoot with scenes shot near the park's lake.

Warner Bros. would not confirm the filming and a spokesman said:

I'm afraid I can't give out too may details at this stage, as the film is not released until July 2007 and we don't want to spoil it for audiences.