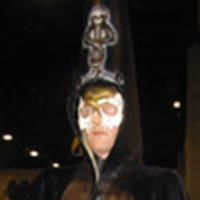 'Potter' displays to be shown at Comic-Con

set to start tomorrow in San Diego (at which a video of director David Yates and actor Dan Radcliffe will be shown), two images of character displays from Harry Potter have appeared online.

You can see images of Gentle Giant's Lucius Malfoy

which will be on display at the event.