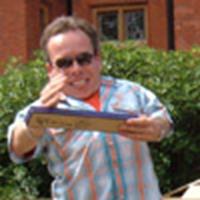 from the Harry Potter movies was the MC at an auction

yesterday in which all the proceeds went to Holm Village Pre-School in Peterborough, UK. One of the interesting items

up for auction was a very rare, original 'Quidditch World Cup Programme' as used in Harry Potter and the Goblet of Fire signed by Dan Radcliffe, which finally went for $3,640.

You can see some pictures from the event here