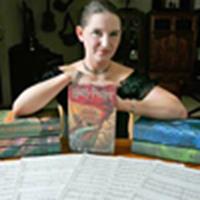 Is it possible for Harry Potter fans to see an opera version of the series in the near future? Well if Tiffany Moon has her way The Harry Potter Opera Cycle may become a reality

Moon, who is a composer, has completed one Potter opera solo of a seven-part opera cycle based on the books. So far she has been denied permission from Rowling as well as Warner Bros. to conduct the opera, but is holding out hope that permission may be eventually given.

Moon on the possibility of the opera becoming a reality:

I can't imagine that this could remain her position forever. That the author of a series of books that created such a powerful new interest in reading by young people across the globe would forever deny the use of her subject matter for a series of operas that could direct this same interest to another very valuable art form.

Moon’s reasoning as to why a Harry Potter opera may appeal to all fans:

What isn't it about them that makes them operatic? It's pure epic. There's the hero who doesn't know who he is, who has to grow into himself. Whose master has to die before he can take on the mantle.

(It has) fabulous love stories, conflicts. There's a very pure good/evil conflict, but more human evils show up as well. Things that make the stories a little more interesting and real.

Ms. Moon in which she further explained her vision of a Harry Potter opera:

HPFZ: The Harry Potter series is packed with emotion, humor and bravery. Will you be focusing on one of these aspects more than the other two?

Ms. Moon: Because an opera is simply a book set to music, which conveys every part of the book, from the plot development, to the action within each scene, to the ver insides of the characters themselves, I would not be composing for the HP books correctly if I weren't writing music that encompassed all parts of the books. I'm not creating an interpretation; I'm composing precisely for each book, very nearly in its entirety.