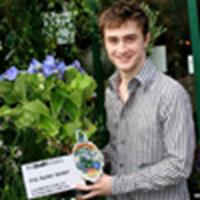 Dan helped out at the Bush Theatre's Annual Summer Party which is organized to thank the patrons for their support, Dan also sold some 'Bush Bushes' to guests while they attended the event, which took place at the Fulham Palace Garden Centre on last Thursday.

You can view the pictures of Dan here

. Thanks to Ava and Patricia for the link. Also according to Patricia, Dan did something similar last year, but worked as a busboy.

Former alumni of the theatre include Alan Rickman, Jim Broadbent and Kate Beckinsale.