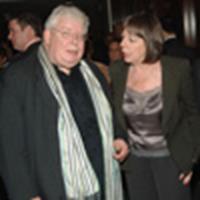 Stars from 'Potter' win on Broadway

last night given by the Drama Desk, an organization of theater journalists and critics.

Mr. Griffiths won the best actor award for his performance in The History Boys, while Ms. de la Tour won a featured actress award for the same play. Mr. Dale received the featured actor-musical prize for his portrayal of Mr. Peachum in the revival of The Threepenny Opera.