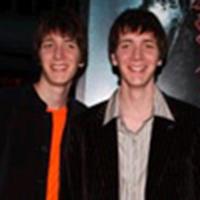 James and Oliver Phelps, the Weasley twins from the Harry Potter movies, are scheduled to appear on Celebrity World Cup Soccer Six

, SKY One's Program Information Dept. in the UK confirmed for us today. The show will air over the weekend starting this Friday at 7 pm.

The show has signed 160 celebrities to appear in a huge football tournament airing on May 12th through the 14th on the UK’s Sky One. In addition to the Phelps twins attending, other guests include

Paul Gascoigne, Kaiser Chiefs, The Darkness, Razorlight, Stereophonics and The Editors. The final game will be held in Birmingham on Sunday and broadcast live. Please check your local listing in the UK for correct times.

New series. A World Cup-themed football competition featuring 160 celebrities. The squads are introduced today, and 30 football matches will culminate in a live final on Sunday.

Please note that we have received emails stating that Daniel Radcliffe was scheduled to appear and this may be where some confusion occurred, however, DR.co.uk

squashed that rumor this morning.

UPDATE: Rupert Grint has been invited to attend this event, however, as of today (Thursday) we have learned from SKY One that his appearance has not been confirmed.