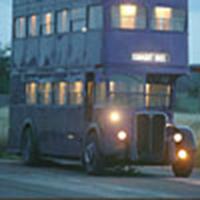 Possible Trelawney & Knight Bus in 'Order of the Phoenix'

Reports from the set of Harry Potter and the Order of the Phoenix have been few and far between, but this morning a report

appeared online stating that Emma Thompson will reprise her role as Professor Trelawney and that the Knight Bus will also be making an appearance in the movie.

According to HPFZ from an extra in the film:

I have definite news that the scene where Trelawney is sacked by Umbridge will appear. It takes place in the courtyard (the one used at the end of GOF) and features Filch, Trelawney, Dumbledore, McGonagall, Umbridge and all of the main student cast (however, none, apart from Harry, play a big role in the scene).

During the scene, a group of extras (including me) have to stand on the steps outside the courtyard's main doors while [the teachers] and Harry have to pass through us. Trelawney is standing traumatised over a large group of her suitcases. (However, she isn't wailing and screaming like a mad person as described in the book. She's just standing upset and overwhelmed.)

I can also confirm that there's a Knight Bus stored on one of the sets, [and that it is slightly different from the one in Prisoner of Azkaban.

As of now we can't confirm the authenticity of this report, but if true the movie sounds like it will be fun to watch.