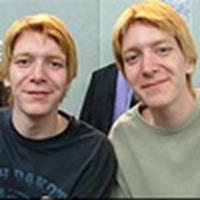 May 1, 2006 at 9:48 AM ET
Geri     CBBC Newsround
james phelps, oliver phelps, harry potter and the order the phoenix, order of the phoenix, collectormania 9

in the UK. James and Oliver Phelps and Robert Pattinson signed autographs for many hours over the days of the convention and even mentioned that filming on Order of the Phoenix is "really good fun."

We can't say too much, but filming is going really well - it's really good fun.

We've met a few of the new actors to join the cast and they seem really cool and we're looking forward to working with them.