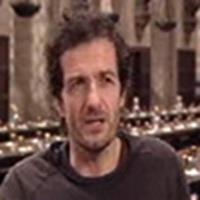 David Heyman on the 'OotP' set

Heyman: 'OotP' "trailer by the end of the year"

promotion for the latest Harry Potter DVD in the UK, producer David Heyman said that fans can be expected a trailer from the fifth movie "some time towards the end of the year" and that the film "will probably come out in the summer or autumn of 2007, with Half-Blood Prince set to follow in 2008."

Daniel also let CBBC Newsround know that the kiss between Harry and Cho had to be rescheduled due to him being sick but joked "Katie escaped, but I will get her."

UPDATE: Thanks to Cora for pointing out that you can win a signed DVD copy of Goblet of Fire courtesy of CBBC Newsround. The DVD is signed by Daniel, Rupert and Emma and will be given to one winner, a runner-up will receive a bagful of Goblet of Fire goodies. You can enter here

by answering one question, the contest ends at Noon on April 3rd. Good luck to all the UK fans that enter.

UPDATE II: Thanks to TLC

via Lizo from CBBC Newsround you can see the video here