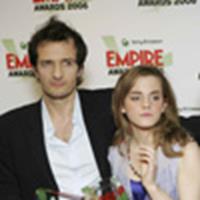 David & Emma at the Empire Awards

'Order of the Phoenix' update from Empire Awards, BBC

, Harry Potter producer David Heyman spoke about Order of the Phoenix filming, Jason Isaacs voiced his hope that he would be back and Daniel Radcliffe went against the grain & stated that the fifth book is actually one of his favorites: "The third and the fifth are my favourites, which is a very uncommonly held opinion."

David on what has actually been filmed to date and how long filming will take:

We've done a little bit of action so far. We've done some stuff involving centaurs and Grawp, who is Hagrid's 16ft brother. The kids have to act against a lot of blue screen for characters like Grawp, but thankfully, they're used to that by now.

We're actually shooting until the middle of May and then we break up for two months so the kids can do exams. Then we pick up in July and we shoot until October or November.

Jason discusses his wish to remain with the series:

I hope so - you'll have to ask David. I can't bear the idea that somebody else would get to wear my Paris Hilton wig, but you never know.

Daniel gives his take on the fifth book:

I think the problem is that Harry can bee seen to come across as quite petulant in the book, and I don't actually think that's the case. I think when JK Rowling puts things in capital letters I don't think that necessarily means he's shouting. It could just refer to the sort of energy behind what he's saying. I think that's one of things that people object to about the book, is that they don't want a manic-depressive superhero.

(can take a while to load in Quicktime) of the acceptance speech of David and the trio.

UPDATE: Additionally, BBC Radio 1 reports that today Dan will be filming the kissing scene with Cho Chang, in which he says: "It'll be odd because one of my parents will be on set." Click here

to read what the young actor plans to do about it. Thanks to Cristal for the tip.