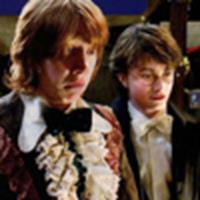 , on newsstands today. The reviewer gives the DVD a B+.

The segment titled Reflections on the Fourth Film gives a surprisingly touching sense of the camaraderie among the young cast members: and a prolonged postproduction chat with Radcliffe (without glasses!), Emma Watson (wearing braces!), and Rupert Grint (shorter hair!) shows them to be both refreshing dorks and seasoned pros.

The article also has a snippet about Dan's inability to dance which is shown on the DVD under Preparing for the Yule Ball.

has posted their review, giving the DVD a B+ also.

Snippet from their review:

The aging actors actually act like real, rambunctious teens; the heavy special effects are dazzling, and there's a wicked sense of humor intertwined. And it's a relief to loosen up the series like that.

has surfaced from IGN.com giving the DVD a 9 out of 10 score:

The "Additional Scenes" featurette has a great deal of deleted material. This isn't just cut lines or short scenes removed from the final film; these are full five, six minute scenes that didn't make it.