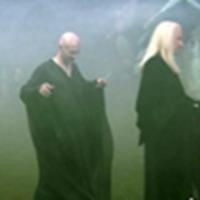 A batch of new clips from the Harry Potter and the Goblet of Fire DVD showing new interviews with Dan, Rupert, Emma and Ralph Fiennes have appeared on the official Harry Potter site as well as AOL's Moviefone.

AOL's Moviefone's Inside the DVD video

features interviews with Daniel, Rupert and Emma, as well as Ralph Fiennes discussing their characters. Some of the video we have seen before but the interviews with the trio are new.

on the official Harry Potter site has posted new clips (clip 3 and 4) with Ralph Fiennes as Lord Voldemort and the graveyard scene. An additional clip shows behind-the-scenes footage of the Triwizard Champions.

Thanks to Matt and Moviefone for the links.