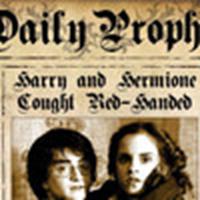 Daily Prophet, other props for 'Potter' produced by two friends

The look of the newspaper read by most of the wizarding community in Warner Bros.' Harry Potter films was designed by Crazy Diamond

, a company created by two old school friends in the UK with a penchant for medieval research and digital typefacing.

Alex Moseley and Roger Mills have left their mark on the "Monster Book of Monsters" and other props, which are based on fonts they created by hand and scanned into a computer.

From the Irish Examiner

"About half a year before the first Harry Potter film came out, I got a call from a designer at Leavesden Studios, asking for permission to use our fonts in the film," said Mosley. "Ever since then, the designer and others there have produced beautiful props for the Harry Potter films, utilising the whole range of our historical typefaces.

Fonts the two have created were meticulously traced and verified from archives at Leicester and Manchester libraries, the British Library and Bodleian Library, and museums and libraries around the country.